Not Just a Number: Communications Major Anne Evans on Why WPU

Much to her surprise, Anne Evans felt immediately at home at William Peace University.

She had already decided to attend the University of Tennessee, but as soon as she stepped onto WPU’s campus, she said, she fell in love.

“My tour guide was from Beaufort, South Carolina, which is only 25 minutes from where I’m from,” Anne said. “It was such a small world, so as soon as I left, I said to my mom, ‘I think I want to go here.’”

Since then she’s never looked back. Now a junior, Anne is studying Communications with a Concentration in Multimedia. She also plays on the women’s lacrosse team, swims on the swim team, is Multimedia Editor of The Peace Times and serves on the Student Athlete Advisory Committee. 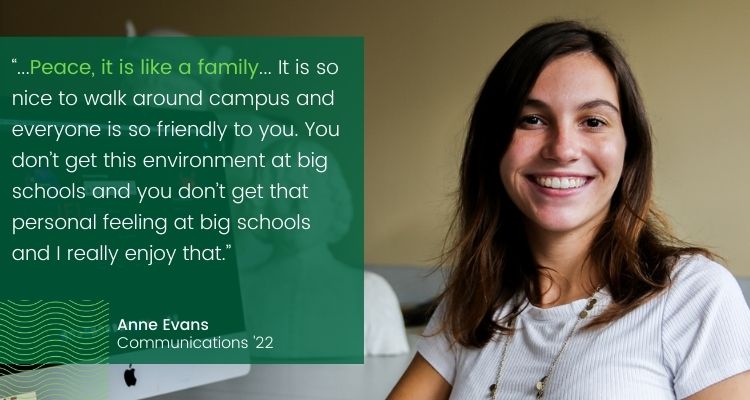 But when you ask her what her favorite part about WPU is, she brings up another part of her experience altogether: the relationships she and all WPU students get to have with their professors.

“Professor Christman has helped me so much in particular,” she said. “I had him my first semester freshman year, and ever since I told him what I was interested in, he’s helped me find my path in communications and beyond.

“He’s just helped me so much to grow as a creative and as a person. And I feel the same way about the majority of professors I’ve had at WPU.”

Anne has had a camera in her hand since she was 12 years old when she started photographing her brother’s swim meets to fight boredom. Ever since then, she’s wanted to pursue creative work, which led her to the communications major.

Her background in photography ignited an interest in graphic design and learning how to do more with her creative skills. So she set about teaching herself, and taking classes in, the platforms included in the Adobe Creative Suite, such as Photoshop and InDesign.

This ultimately led her to discover a dream opportunity: a graphic design internship for a major league lacrosse team. With the help of Professor Christman to ensure credit transfer, Anne was able to turn this golden moment into an incredible learning experience.

“I definitely learned a lot,” she said. “If you look at the difference from the work I created at the beginning of summer and the art I was creating by the end and am creating now, there is such a noticeable progression in how much I improved.”

It is through this experience that she gives her best advice to other WPU students.

“Be as involved as you can with whatever opportunities your professors provide to you,” she said. “Our professors are great at finding unique opportunities for students, so if one of your professors reaches out to you, or says they can help you with something, take them up on this, because they have connections that you couldn’t even believe.”

Anne plans to graduate in 2022 and dreams of working as a Professional Sports Content Creator.

“I’d say my favorite thing is the people and the environment and the positive vibes that WPU gives me.”

Not Just a Number: Psychology Major MacKenzie Allison on Why WPU