#PrepareAtPeace: Terrace Myles ’16 Reflects On His Time at WPU

UPDATE: Terrace received a job offer from KWQC TV-6 News in Iowa a few months after graduating. He is currently working there as a Video Journalist.

When the lights go on and the cameras start rolling, it’s obvious Terrace Myles, a communications major, also elected “Mr. Peace” by his fellow class members, feels comfortable in his own skin. The soon-to-be-graduate feels at home in front of the camera, and at home when talking about his four years at Peace. It’s obvious that Terrace just feelsat home on campus, sitting on the bench next to William Peace as he speculates on the next phase of his life. Terrace will be graduating this Saturday, May 7 – and with the rest of his 2016 graduating class, he’ll be saying a bittersweet goodbye to the place he’s called home since 2012.

“Anyone who goes to Peace will tell you it’s the family atmosphere that makes Peace.”

Myles arrived at Peace amidst a torrent of change. Entering his freshman year, he was among the first round of male students following the decision to go fully coeducational as an institution. And despite the controversy surrounding the University’s transition, Myles looks back fondly on the friendships he created with both the returning and new students.

“I think it made us [the students] grow closer as a family.”

Family is a word that Myles uses often when describing Peace. He primarily cites the family-like atmosphere that envelopes the campus as the reason why he chose WPU among other colleges he was accepted into. He also says the environment will be what he misses most when he graduates.

“Anyone who goes to Peace will tell you it’s the family atmosphere that makes Peace,” Myles said, fondly. “That feeling you get when you come on campus and you see all the people that know your name – you’re not just a number. I mean, that’s the biggest thing for me.” 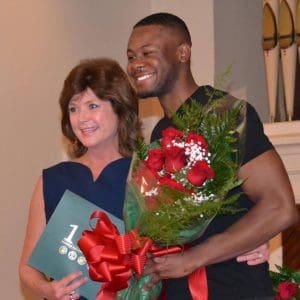 Myles was not only present as WPU history unfolded – he’s actively been a part of it and contributed to it, as well as other aspects of student life on campus. Whether he’s ushering in a new class of Peace Pacers as an orientation leader, starting his very own news broadcasting show, 15 East News, or being voted this year’s Mr. Peace – Terrace is ever-present on campus.

Myles insists that he is in no way the same person today as he was when he first came to Peace four years go, something he attributes greatly to his professors, whom he says serve not only to teach their respective academic fields, but valuable lessons in life.

“The possibilities are basically endless when you have professors like Roger Christman and Dr. Owens,” Myles said. “They prepare you, not only for the news industry or the communication fields, but for life in general.”

To watch Terrace, along with the other many graduates walking across stage on Saturday, visit the University’s YouTube Channel to view a livestream of Commencement in its entirety: www.youtube.com/WPeaceU.