William Peace University is proud to announce the addition of Men’s and Women’s Lacrosse to its athletics roster. With the additions, WPU becomes the only higher education institution in the Raleigh area to offer NCAA men’s lacrosse. The University will immediately conduct a national search for a head coach and staff, explore development strategies, and begin recruiting student-athletes for competition with an anticipated start date of spring 2018.

“We are thrilled to be adding the exciting and growing sport of lacrosse to Pacer Athletics,” said Brian C. Ralph, Ph.D., President of William Peace University. “Our student-athletes are difference makers in competition, in the classroom and in the community. I am confident our new lacrosse teams will be substantive contributors to campus life and our academic programs.  We all look forward to welcoming these new Pacers and cheering them on.”

“I would like to thank the University Board of Trustees, President Ralph, and Frank Rizzo for approving the addition of men’s and women’s lacrosse here at William Peace,” said Phil Rowe, Director of Athletics. “The lacrosse community continues to expand on the national landscape and in the state of North Carolina and we’re excited to be part of the sport’s growth.” 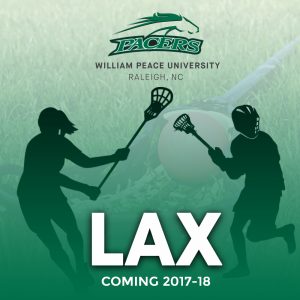 Adding men’s and women’s lacrosse will continue to increase enrollment and expand the geographic diversity of its student population. Both programs are expected to generate enthusiasm campus wide and enhance the overall student experience at WPU.

Who is going to coach the team?
A national search to find the first head coach in the history of the program will begin immediately. For more information about the position, visit: www.peace.edu/about_wpu/careers-at-wpu.

Where will the team play?
University administration is in collaboration with current and future partners in the Triangle area to secure a quality home site for both practices and games.

When will the team start competition?
Both teams are expected to take the field for their inaugural season in the spring of 2018.