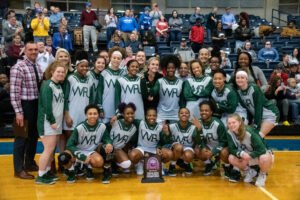 The William Peace University women’s basketball team has received an at-large bid into the NCAA Division III Tournament. This marks the first NCAA Tournament appearance in school history for any athletic program. The Pacers will head to Transylvania University in Lexington, KY as they match-up against Oglethorpe University on March 6th

The Pacers completed the 2019-20 regular season in historic fashion as they closed the season with a (22-3) overall record and a (15-1) conference record, which surpassed the previous program record for most wins in a single season in the school’s NCAA era. The team began the year with two imposing wins over eventual ODAC champions, Randolph-Macon College (73-63) and Eastern Mennonite University (77-53). They would go on to defeat regionally-ranked and future Capital Athletic Conference champions, Christopher Newport University (82-68), before picking up an impressive win over the regionally-ranked University of Mary Washington (75-71).

The Pacers showed incredible resilience as they commanded a 15-game winning streak before concluding the regular season with a tenacious (70-69) win over Greensboro College. The Pacers hosted the quarterfinals of the USA South Conference Tournament on February 22nd where they defeated Huntingdon College (72-61). The Pacers wrapped up the tournament in the semifinals with a hard-fought (59-49) loss to Piedmont College.

The Pacers received several USA South Conference accolades, as Coach Grahm Smith was named Coach of the Year in just his second year at the helm of the women’s basketball program. Senior Mikayla Ray was named to the First Team East Division, while sophomore Lauryn Cross and junior Jaymesha Sanders were named to the Second Team East Division. Sanders, Ray, and Cross led the team offensively this season, as they all averaged over 11 points per game. Sanders recorded her 1000th career point on January 18th in a win over Mary Baldwin, while Ray reached a career milestone of 1000th rebounds just a few days later in a win over Methodist University.